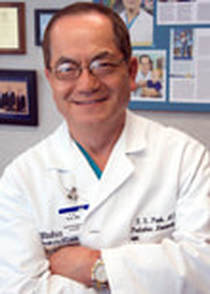 Dr. Park is the most experienced SDR surgeon in the world to provide Pia the chance to live a life free of pain and maintain her mobility well into adulthood.
Tae Sung Park, Shi H. Huang Professor of Neurosurgery and Neurosurgeon-in-Chief at St. Louis Children’s Hospital, received a Distinguished Alumni Award from Washington University in November.After graduating from the Yonsei University College of Medicine in Seoul, Korea, in 1971, Dr. Park completed his neurosurgery residency at Yonsei and received first place in the board certification examination by the Korean Board of Neurological Surgery.

He moved to the University of Virginia in 1976, and after six additional years of residencies and fellowships, Dr. Park scored in the 100th percentile in the written examination of the American Board of Neurological Surgery. Dr. Park has made pioneering improvements to several neurosurgical procedures for children, most notably the selective dorsal rhizotomy (SDR). In 1986, he started the SDR program to improve walking in children who suffer from spastic cerebral palsy. Today, he has performed SDR surgery on more than 2,600 children* and young adults from 53 countries. His improved surgical technique and patients have been featured in Time magazine and on CNN, NBC and the BBC.

* Dr T.S. Park has treated over 3,600 patients across 71 countries since this original article was published in 2013.

Always interested in the long-term progress of his patients, Dr. Park has created a Facebook page for SDR to stay connected to his domestic and international dorsal rhizotomy patients. His Facebook page now has more than 3,500 members, and he has been instrumental in the creation of an international network of SDR Facebook pages in the United States, England, Wales, Scotland, Israel, Ireland, Hungary, Sweden, Brazil, Poland and Korea.

Dr. Park received a seven-year Javits Neuroscience Investigator Award from the National Institute of Neurological Disorders and Stroke (NINDS) to fund his laboratory research from 1999-2007. He was honored with the most prestigious award given to neurosurgeons, the H. Richard Winn, MD, Prize for Meritorious Research from the Society of Neurological Surgeons in 2008, and he received the Distinguished Faculty Clinician Award from Washington University School of Medicine in 2011.

Dr. Park’s laboratory work initially focused on the role of adenosine in the regulation of cerebral blood flow in newborns. His laboratory was the first to demonstrate evidence that linked some chemical mediators to blood-brain barrier breakdown during post-asphyxic restoration of the flow of blood in the newborn.

He and his wife, Meeaeng, have two children.
Of all the surgical procedures currently performed on patients with cerebral palsy (CP), selective dorsal rhizotomy (SDR) has undergone more thorough scientific scrutiny than any other (including orthopedic surgery). Accumulated evidence and our own experience indicate that SDR is an excellent option for selected patients with spastic cerebral palsy. We believe parents and patients should inquire about SDR as a part of the management of CP before the patient undergoes orthopedic surgery.

SDR involves sectioning (cutting) of some of the sensory nerve fibers that come from the muscles and enter the spinal cord.

At the time of the operation, the neurosurgeon divides each of the dorsal roots into 3-5 rootlets and stimulates each rootlet electrically. By examining electromyographic (EMG) responses from muscles in the lower extremities, the surgical team identifies the rootlets that cause spasticity. The abnormal rootlets are selectively cut, leaving the normal rootlets intact. This reduces messages from the muscle, resulting in a better balance of activities of nerve cells in the spinal cord, and thus reduces spasticity.

Details of our SDR Procedure at St. Louis Children's Hospital

Different surgical techniques are utilized to perform SDR. Neurosurgeons typically perform SDR after removing the lamina ( laminectomy ) from 5-7 vertebrae. That technique was also used at the St. Louis Children's Hospital Cerebral Palsy Center to perform SDR on over 140 children with CP. However, we were concerned about possible problems that can arise from removal of such a large amount of bone from the spine. Additionally, because of the extensive removal of the bone, we could not offer SDR to children with weak trunk muscles or to adults.

In 1991, we developed a less invasive surgical technique, which requires removal of the lamina from a single lumbar vertebra (Figure A&B).

SDR begins with a 1- to 2-inch incision along the center of the lower back just above the waist. The spinous processes and a portion of the lamina are removed to expose the spinal cord and spinal nerves. Ultrasound and an x-ray locate the tip of the spinal cord, where there is a natural separation between sensory and motor nerves. A rubber pad is placed to separate the motor from the sensory nerves. The sensory nerve roots that will be tested and cut are placed on top of the pad and the motor nerves beneath the pad, away from the operative field.

After the sensory nerves are exposed, each sensory nerve root is divided into 3-5 rootlets. Each rootlet is tested with EMG, which records electrical patterns in muscles. Rootlets are ranked from 1 (mild) to 4 (severe) for spasticity. The severely abnormal rootlets are cut. This technique is repeated for rootlets between spinal nerves L1 and S1/S2.

When testing and cutting are complete, the dura mater is closed, and fentanyl is given to bathe the sensory nerves directly. The other layers of tissue, muscle, fascia, and subcutaneous tissue are sewn. The skin is closed with glue. There are no stitches to be removed from the back. Surgery takes approximately 4 hours. The patient goes to the recovery room for 1-2 hours before being transferred to the Neurology/Neurosurgery Floor.

Advantages of our SDR Technique Over Other Techniques

We believe that our selective dorsal rhizotomy procedure has these significant advantages over others: